The 2021 All-American Bowl will continue the Road to the Dome tour on Wednesday, December 2 at 8 p.m. ET on the NBC Sports YouTube channel, honoring seven All-Americans in the twelfth installment of a 15-episode weekly digital series.

In this week’s episode, presented by GEICO, the All-Americans will be virtually presented with their exclusive All-American jerseys provided by adidas. Director of Scouting for 247Sports Barton Simmons will provide in-depth video analysis of each All-American being honored. An interview with University of Iowa commit Cooper DeJean will also be featured within the episode.

Only 100 football players receive the honor of wearing the All-American Bowl jersey each year. 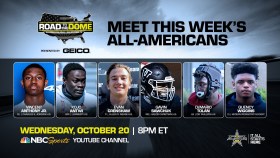 Road to the Dome Digital Series to be Released October 20 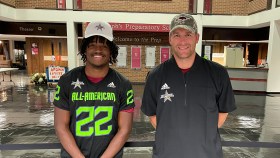 Defensive Back Keenan Nelson Jr. Honored as a 2022 All-American as Part of... 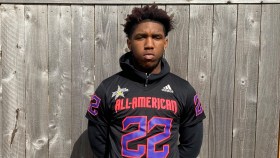 Each player selected as an All-American in the twenty-first edition of the All-American Bowl, will be celebrated as part of a special two-hour “All-American Bowl: Declaration Day presented by GEICO” honoring each of this year’s 100 All-Americans on Saturday January 2, on NBC.

The Road to the Dome, airing on December 2, will honor the following players:

As an NBC Sports-owned property, the All-American Bowl is part of a marquee lineup of elite events that includes the Olympics, the NHL, the Premier League, and the number one primetime show since 2011: Sunday Night Football. The All-American Bowl is annually the most-watched, most-talked about, and most-prestigious high school all-star event with more than 4,500,000 unique television viewers and over 25,000 in attendance. The history and tradition of the All-American Bowl is unparalleled: 450 draft picks; 66 Super Bowl champions; 160 Pro Bowl selections; 17 Heisman finalists including, but not limited to: Odell Beckham Jr., Christian McCaffrey, Tim Tebow, Adrian Peterson, Joe Thomas, and Trevor Lawrence. For more information, visit NBCSports.com/AllAmericanBowl, or follow us on Facebook, Twitter, and Instagram (@AABonNBC).